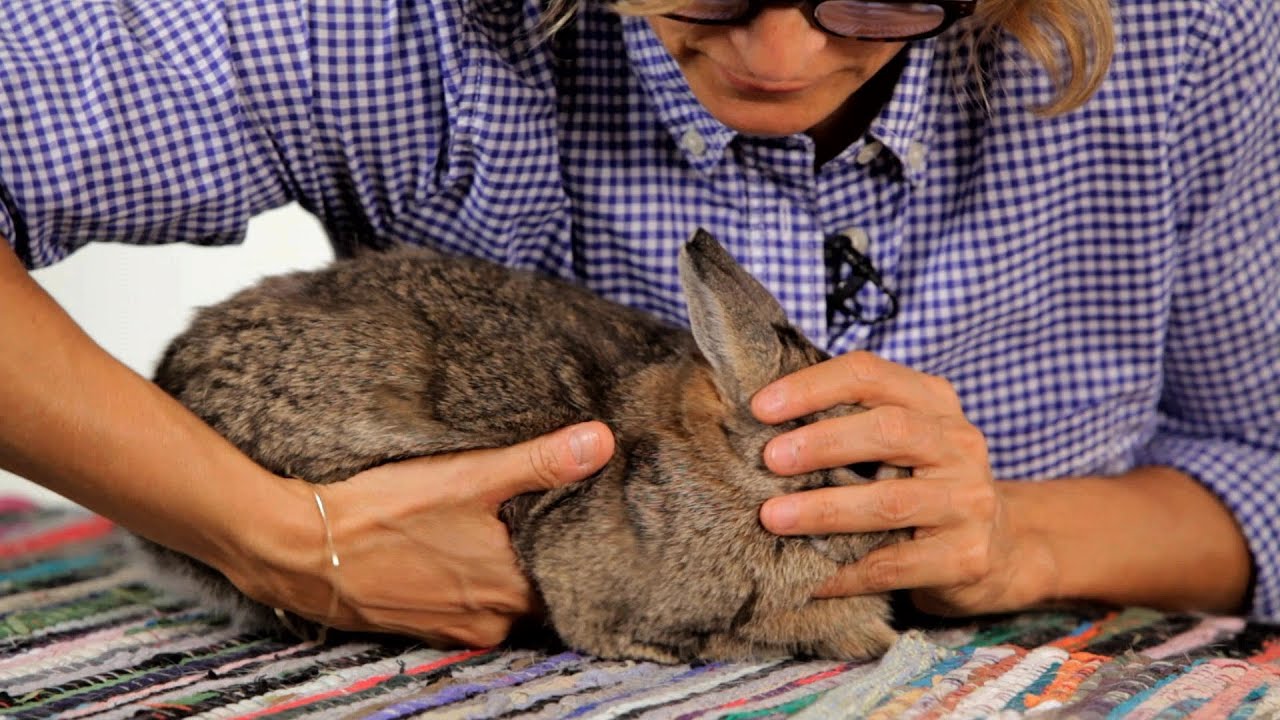 Mary: How to handle your pet rabbit. This is a big deal. I see people all the time mishandling the rabbits so tell me. How do I, what’s the appropriate way?

Amy: Nothing in nature picks up a rabbit. Not even its own mother in this kind of rabbit.

Amy: So the best thing to do is set up the rabbit in a good sized cage like a puppy exercise pen. Give him room to move around. Give him a nice big litter box. This is before you handle him. And give him a couple days to chill out and get to know the environment. Get to know what it’s like when you walk by.

Amy: Then, by the time you’re ready to handle him, he’ll be familiar with you.

Amy: Now, the best thing to do is to sit down in his cage with him, in his puppy pen with him. Read a book. Make a phone call. Text somebody.

Amy: Just do things that have nothing to do with the rabbit so he has the opportunity to come over and sniff at you and climb into your lap if he wants to without hands grabbing him. Many of these animals, especially really little rabbits like this one, have been picked up so often that after awhile they just start to snark at your hands and nip at them because that’s the only way they can keep hands away from them.

Amy: And then we work with them a long time to calm them down. So what you want to do when they’re accepting of handling is to take your hand and really slowly, bring it in from the side rather than from the front, rather than . . .

Mary: Because you want to approach on the side always.

Amy: Because they can’t see directly in front of themselves. Rabbits have not a true blind spot but a functional blind spot right in front of them. And if you do this with your fist and put them between your eyes and look around you’ll get an impression. You won’t be able to see anything ahead of you. And that’s how rabbits are naturally. So you want to bring your hand in from the side, pause for a minute to give your rabbit a chance to decide whether he wants to be touched. If he doesn’t, move away. You move away.

Mary: You mean out of the house?

Amy: Move out of the house. Just move your hand away.

Amy: That teaches your rabbit that you’re going to respect his space. That if he needs more space and more distance you will respect that. If you don’t do that the rabbit will develop a habit of moving away from you to get that distance.

Amy: Once you persuade him that you will move away when you’re respecting his signals you remove his need to move away from you. Which is really great because you want him ultimately to come to you. So when you go to pick him up, what do you do? I’m going to take him out of here. This is a small rabbit and I have rather long fingers so I’m going to pick him up just this way to get him this far and put him here.

But when you’re picking up to carry him the safest way to carry him is what we call the football hold. Never pick up a rabbit by the ears. A lot of people years ago used to do that. Many people still grab them by the scruff and dangle them. But that skin wasn’t designed to hold the weight of a rabbit. It just wasn’t. It’s not comfortable for the rabbit. When you’re picking up a rabbit comfortably

How to Use a Sewing Machine

How to make sutli Experiment

How to Give Yourself a Manicure

How to Prune Pepper Plants