How to Knit Jogless Stripes in the Round | Circular Knitting 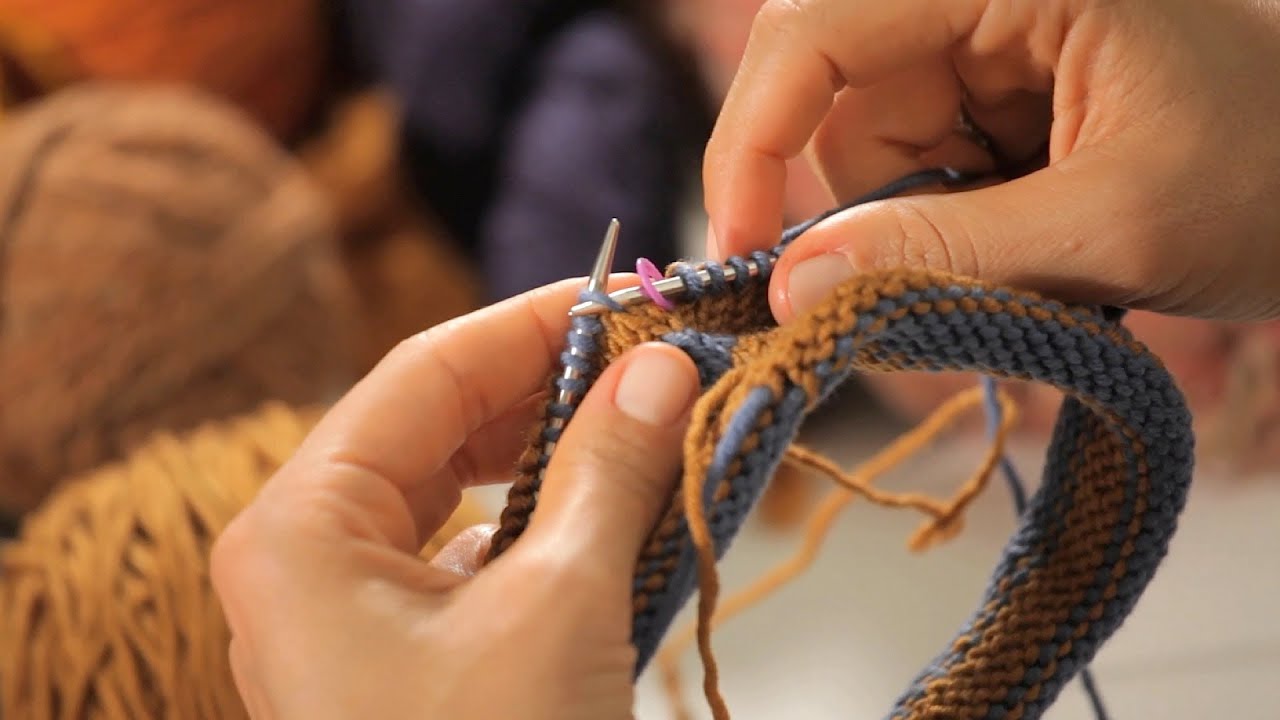 I’m going to show you a trick for making jogless stripes in the round.

Now, what a jog is, is when you finish one round and you start the next round and if there is a color change between those two rounds, it’s really obvious that the colors don’t line up.

So what you end up with is a striped project where your stripes don’t line up on the sides. And that would be at the end of round marker.

So I’m going to show you the trick that I know to make the stripes a little less joggy.

And a lot of it will block out when you wet your project. Remember, always block your finished pieces. It takes things from homemade to handmade.

So I’m coming around now and I’m finishing the last three stitches on the last round of my orange stripe.

I’m going to finish my last three stitches of orange. One, two, three. Here’s my end of round marker. I’m going to slip it over.

So for this trick, you actually do nothing different on your first round. So the first round of jogless stripes is that you just start knitting your new color.

So I’m going to knit this round blue. So I’m approaching the end of the blue round. Getting down there, that’s six stitches left, five, four, three left, two left, last blue stitch.

Now this stitch feels a little loose because the orange isn’t anchored to anything. That’s totally fine.

I’m going to give a tug on that orange yarn so that things kind of line up here. And what that does is it evens out the height of the rounds.

So when you’ve got your slip stitch here, it means there are actually three blue stitches instead of four. Just in that one column. And the next stripe up, you’ve got three orange stitches instead of four. The same thing all the way up. And that helps the height of the stripes look like they are the same. So you don’t get an obvious jog here at all.

You can see, it looks just the same.

And you will see a little bit of puckering before you block it. That’s just because you’re carrying the stripe that you’re not using, you’re carrying that color up the inside. And that will all even out with a nice soak and a dry, especially if you give it some tugs.

So when you do your color change round, the first stitch of the new color you knit normally and you continue to finish the round.

When you get back to the second round of the new color, you would slip the first stitch as if to pearl and then finish the round like normal.

And then continue on with your blue or whatever your color is until it’s time to knit with the next color.

Start it just like normal. Knit the first stitch in orange or your other color. Finish the round.

And then when you get back to the second round of orange, slip the first stitch as if to pearl, and finish the round.

And that is one method for creating jogless stripes in the round.

How to Do a Walking Lunge | Boot Camp Workout

Shorten the Sleeves on a Jacket – DIY Style – Guidecentral

How Do Bees Turn Pollen Into Honey?

How To Make A Ribbon Bookmark – DIY Crafts Tutorial – Guidecentral

How to Breathe during Labor | Pregnancy

How to Use a Mantis XP Tiller Rental

How to Take Care of a Betta Fish